TIME OF THE VISION 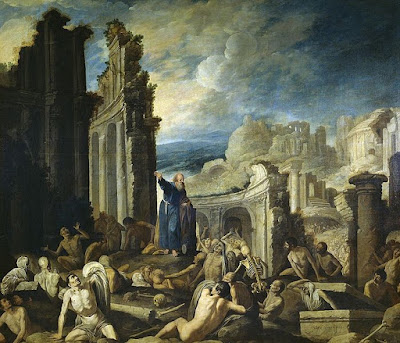 3 The word of the Lord came expressly unto Ezekiel the priest, the son of Buzi, in the land of the Chaldeans by the river Chebar; and the hand of the Lord was there upon him.
4 And I looked, and, behold, a whirlwind came out of the north, a great cloud, and a fire infolding itself, and a brightness was about it, and out of the midst thereof as the colour of amber, out of the midst of the fire.

8 And they had the hands of a man under their wings on their four sides; and they four had their faces and their wings.

9 Their wings were joined one to another; they turned not when they went; they went every one straight forward.

11 Thus were their faces: and their wings were stretched upward; two wings of every one were joined one to another, and two covered their bodies.

12 And they went every one straight forward: whither the spirit was to go, they went; and they turned not when they went.

14 And the living creatures ran and returned as the appearance of a flash of lightning.

Author The author, whose name means “God Strengthens”, is identified as "Ezekiel the Priest" (1:3). Although this identification has been challenged, there seems to be no valid reason for doubting it. He was probably a member of the Zadokite priestly family that came into prominence during the reforms of Josiah (621 B.C.). He was trained in the priesthood during the reign of Jehoiakim, was deported to Babylon (1:1; 33:21; 40:1) in 597 B.C., and settled in Tel Abib on the Chebar Canal near Nippur (1:1). His ministry briefly overlapped Jeremiah’s
Date Ezekiel’s call came to him in 593 B.C., the fifth year of Jeholachin’s reign. The latest date given for an oracle (29:17) is probably 571 B.C., making his ministry about twenty years long. The death of his wife occurred about the time of the destruction of Jerusalem in 587 B.C. (24:1, 15-17). Exiled in the second siege of Jerusalem, he wrote to those yet in Jerusalem about its imminent and total destruction, including the departure of God’s presence. Parts were also apparently written after Jerusalem’s overthrow.

Content Ezekiel’s personality reflects a mystical strain. The immediacy of his contact with the Spirit, his visions, and the frequency with which the Word of the Lord came to him provide a connection between the older ecstatic prophets and the classical writing prophets. His spiritual experiences also anticipated the activity of the Holy Spirit in the New Testament.

v  Ezekiel’s message was addressed to a demoralized remnant of Judah exiled in Babylon. The moral responsibility of the individual is a primary theme in his message.
v  The book is easily divided into three sections, Judah’s judgment (chs. 4-24), the heathen nations’ judgment (chs.25-32), and future blessings for God’s covenant people (chs. 33-48).

Two theological themes act as a counterpoise in the prophet’s thought. In Ezekiel’s doctrine of man, he placed the emphasis on personal responsibility (18:4, "the soul who sins shall die"). On the other hand, he emphasized the  divine grace in the rebirth of the nation. The repentance of the faithful remnant among the exiles would result in the re-creation of Israel from the dry bones (37:11-14).
The divine Spirit would quicken them to a new life. By this emphasis on the Holy Spirit in  regeneration Ezekiel anticipated the New Testament doctrine of the Holy Spirit, especially in the Gospel of John.
Dear Friends, yesterday we studied Ezekiel 37: 1-14, in which we reviewed the prophesy of a renewed Israel. I wanted us to have a sneak preview of what lay ahead for all those that walk in accordance of the commandments of the Lord. We will be among those who enjoy the restoration of Israel.

Much like our study of the Book of Daniel, we will again review visions and prophecies of destruction, idolatry, and captivity. Here is an outline of our study:

1:1 The thirtieth year is probably the age of Ezekiel when he began his ministry. The river of Chebar: A navigable canal on the Euphrates River flowing southeast from above Babylon. Visions is a special term used by Ezekiel to introduce his major revelations, always with the word "God" to indicate their source. Given while he was awake, they were actual pictures likely accompanied by God’s audible voice.

1:3 Ezekiel means "God Strengthens" or "God Is Strong." Ezekiel was a member of the priesthood Chaldeans; Babylonians. Hand of the Lord: A phrase used by Ezekiel to express how God’s Spirit came upon him in revelation.

1:4-28 This highly symbolic and apocalyptic vision of God can be divided into three parts: vv.4-14 (the storm and the creatures); vv.15-21 (wheels and the glory of God); and vv.22-28 (the firmament and throne). A similar vision is described in ch.10 where the presence of God leaves the temple. Though the vision is intricate and difficult  to interpret at points, its intent is to reveal that the sovereign Lord God Himself is about to intervene in history to judge Judah; He has chosen Ezekiel, who  responds with incredible awe (v. 28), to warn them.

1:4 A whirlwind symbolized the coming of God Himself. Out of the north: Either God chose to follow the path of the exiles, by which He identifies with plight, or He has come from the direction where the Babylonians believed their gods were located and must, therefore, have overcome them on the way.

1:10 The various faces symbolize God’s rule over all of creation.

1:11 Each creature is described as having four wings (v.6), and in reverence of God’s presence they each covered their bodies with two of them.

1:13 The difficulty Ezekiel has in communicating his vision is apparent when he tells us that in addition to the creatures appearance in the form of a man, their appearance was like burning coals. 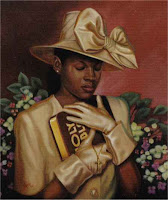